Jaime Jackson, the American author and trimmer, has devised a better way of keeping horses and it doesn’t need much investment. He calls it Paddock Paradise and was inspired by his observations of wild Mustangs and how they move as a herd.

Put simply, it means turning your fields into track ways which encourage the animals to walk further for their daily ration of grass.

You can try it in the spring or summer as soon as your field dries out enough. Or you might think it’s worth making hard, stony tracks to keep going in the winter.

I have a ten acre field that’s on a hill which I chose for my experiment. There is a footbath at the top of the hill, a water trough half way down and some woods at the bottom. We made a track around the edge of the field, very much like a race horse’s training gallop, using electric fencing. My cob was fond of breaking plastic posts so I had to invest in wooden posts but for most horses this might not be necessary. Jaime Jackson, a former farrier who is now a leading barefoot trimmer, suggests scraping the grass off and feeding hay but I was reluctant to do this and allowed them to graze it down. 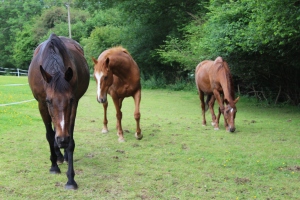 The system has since been extended to other fields which adjoin and I probably have a couple of miles of tracks now some with stony ground and others with wider areas for resting and grazing. The middle of the field grows long grass which we sometimes cut for hay or it can be saved for winter grazing when it is appreciated and less likely to cause foot problems.

It’s the movement and the difference it makes to the horse. We ask these animals to be athletes and they do much better if they don’t spend half their lives in bed. They are grazers who are designed to move. Their feet respond brilliantly and take on an improved and tough shape that can carry you over all sorts of terrain. And they keep fit whether you ride them or not. They move so much more on a track than they do in a traditional paddock because they are herd animals who follow each other in a line in their natural habitat. On a track, they revert to this behaviour.

electric fencing keeps them on the track

Their daily walks are choreographed by the herd leader who either pushes from behind or leads from the front. Horses lower in the pecking order have no choice; they have to move. Their instinct is to stay together and once my track has the optimum amount of grass I can see they are travelling for a few miles every day. A horse in the wild is known to cover about 15 miles a day – no wonder their feet are tough and perfectly worn. Mine don’t walk so far but if they spend enough time on the stony yard – where they can get water and access to the field shelter – their feet hardly need any trimming at all.

Our winters are too wet, the fields too muddy, for me to maintain this lifestyle without some serious investment. The extra movement means the track soon gets poached in high rainfall but I manage to keep mine on it from April/May to October depending on the weather. There are times when they breach the electric fence and pig out in the long grass but if I’m vigilant this doesn’t happen too often.

If you are still not convinced this system is healthier than the traditional stable with paddock turnout, take a look at Casha’s story.

Casha has lived on our system for about five years and came with very stiff back legs. She had an old suspensary ligament injury and wasn’t ridden. I was alarmed when I first saw her because she reminded me of a banana running up a hill. Very slowly she began to improve. She kept up with the others and her owner began taking her for walks in hand on the Forest. Her body became straighter as she lost the banana shape and her fitness level increased. Watching her canter on the track, we talked about her being ridden again. Was she ready? She had improved so much from the constant physio of walking that we thought it worth a try so on one of our walks Lisa got on board and the horse trotted off.

It had been years since Lisa had ridden her and she didn’t want to stay on for long. She got off once the horse slowed down, wearing a smile as wide as the Atlantic.

‘She didn’t rear or behave like a stallion. Amazing.’ 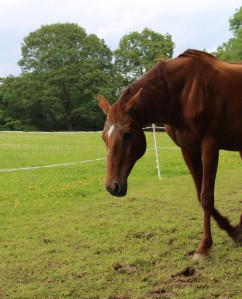 She had been a difficult ride in her young days and rearing had been one of her party tricks. With the benefit of hindsight Lisa felt this was due to discomfort even before her suspensary ligament injury. I hadn’t known what to expect and the animal’s rush into trot might have been a sign of pain and so over the next few months she was slowly reintroduced to a rider on her back. Sometimes she didn’t seem to want to play and at others she remained happy for a good half hour. Lisa always listened to her, respecting the fact that her horse was getting older but delighted that she could be gently ridden again.

Casha is getting on a bit now and her ligament troubled her again this winter thanks to the mud. The vet advised rest and Bute in an effort to reduce the swelling. If you think she should have been stabled I’m afraid it wouldn’t have worked as she seizes up without the movement. But we were able to give her a mud free sick bay for a few weeks since I always save some sections of the winter fields just in case any of them are ill. We weren’t sure whether she would make it but she’s back on the track with the others now and cantering quite well.

Sadly, we don’t feel we can ask her to get through another winter but she’s having a happy summer retirement with her friends.

Casha (right) sheltering from the heat and flies