It’s almost as addictive as horse riding – growing medicinal and health-giving plants for yourself, your family…and your horse. 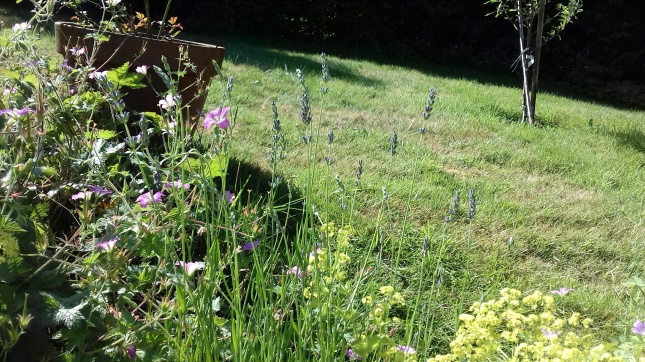 I’ve always gardened but flowers were my strong point and the veg were mostly sad failures which were gobbled up by the slugs. This year has been different. I have been motivated because…well, I don’t know why. Perhaps I had spare time on my hands, or a need for healthier food or I was driven by the various worries that my horses have given me.

My aims were modest at the beginning. I grew some herbs last year in an overgrown patch of my garden that was dominated by pink geraniums and mint. I dug, I battled and I reduced them until there was room for rosemary, sage, variegated mint, marjoram and parsley. They survived with very little effort on my part and my confidence increased. 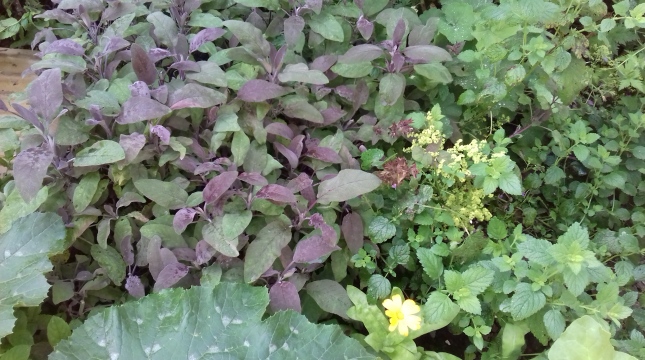 Then last autumn my horse, Sophie, strained her tendons and needed to rest. Here she is with Charlie Brown in the sick bay part of their woodland home getting herself  better and worrying the life out of me. The mother hen in me awoke and as we sped towards winter I gathered as many green things for them to eat as I could find. Willow was growing in the woods but that didn’t stop me harvesting some branches from a tree near home and getting some surprised looks! Willow is great for pain relief and they both ate with enthusiasm. Hazel branches were added and hung up around the shelter daily. 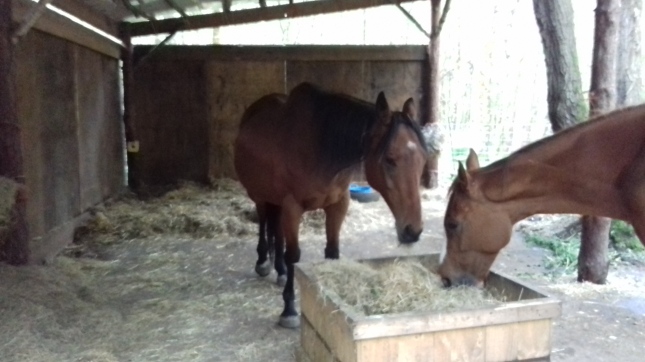 I turned to my garden in search of more things to alleviate their boredom and brighten up their diet. I still had the herbs and I picked them, wishing I had dried some in the summer. It was great when I discovered the rampant, leafy plant dominating one of the flower beds was a variety of comfrey (below). They could have some of that too – it’s known as knitbone and is a traditional remedy for healing. They loved the taste but it was dying back and they wouldn’t have it for long. 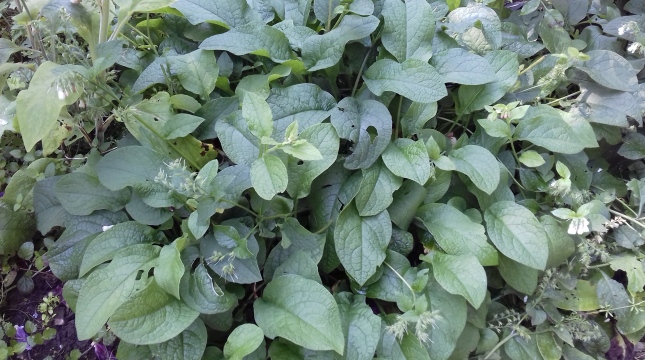 Following hard on the heels of Sophie’s tendon strain was a bout of stomach pain. I suspected ulcers and read all I could find on the internet. It was hard to be sure because she was miserable and didn’t really want to be touched anywhere. Ginger thoroughbreds don’t really like the idea of resting; they would much rather run around on their remaining legs and do themselves some serious damage so I had a grumpy mare to deal with even though she had her friend and more space than is usually advised. The idea of veterinary intervention for the possible ulcers was off putting because the horse needs to be starved for 12 hours in order to be scoped – that would really cheer her up!  And hind gut ulcers, as opposed to stomach ulcers, can’t be detected by scoping anyway. Yes, my vet did look her over, thought it might be her ovaries but he wasn’t overly concerned. So I kept reading, buying natural remedies and herbs and looking again to my garden. In the meantime, she was being walked out in hand and doing a good job of keeping a lid on her desire to tear off while her friend Charlie Brown followed at liberty. Well, I only have two pairs of hands and they have very different speeds. It only once went wrong, thank you, Mr Brown. 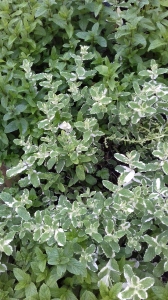 I decided to try some of the most common stomach remedies and see whether she would improve. I bought slippery elm, marshmallow and aloe vera to add to her feed. I also bought a huge 25 kilo sack of limestone flour for about £10 – it’s an anti acid but people also feed it for added calcium.

From the garden she had a daily tea made from lemon balm and lavender flowers (top pic) – I added chamomile since I had it in the cupboard. All are said to be calming and she is a naturally alert TB who needed all the help I could give to reduce any stress. The herb tea became popular with other members of my family and she had to share but didn’t seem to mind! 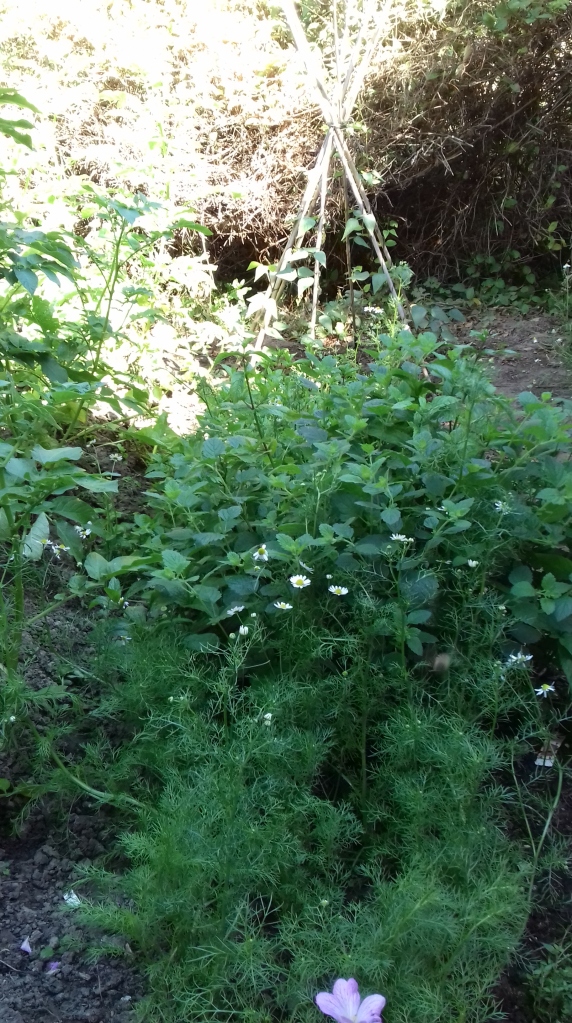 There was a marked improvement. I continued buying the herbs and feeding what I had, they were working and I was determined to get my happy horse back. She was walking comfortably by now and our walks were getting longer. I will write a separate blog about dealing with the tendon – this is about gardening.

This year I wanted more from my herb garden. The comfrey is a garden monster and easy to grow so I now have more of it. A friend who had a shoulder injury said it was very helpful if made into a poultice but I’m advised it should not be offered in large quantities or too frequently due to toxicity risks. I have added calendula (below) and chamomile which are just beginning to flower. In another shady spot I have plenty of sticky weed (clivers) and there is hazel and willow in the hedge. All these are offered as choice rather than put into a feed. Each day I am able to fill up a bag of things to take them. I have also investigated planting seabuckthorn which is said to be a remedy used by the Ancient Greeks for horses with ulcers but bought some juice instead from Thunderbrook Equestrian since I would need so much. 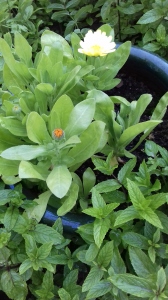 For the humans in my life we have some mange tout, courgettes, beans, tomatoes and potatoes. Slugs were the biggest menace and I wanted my crops to be organic so they were picked off at night for about a month. Now the population is reduced, the weather is drier, which slugs hate, and the plants are mature enough to cope.

I have recently read that dried cabbage is very good for the horse’s stomach unlike fresh cabbage which can be gassy. I haven’t grown any, not being that keen, but I might have room next year…who knows?

Until then I am drying some herbs for saving. This little lot will probably only make a couple of cupfuls of tea or a few feeds so must do more while the sun shines. Happy horse gardening, everyone… 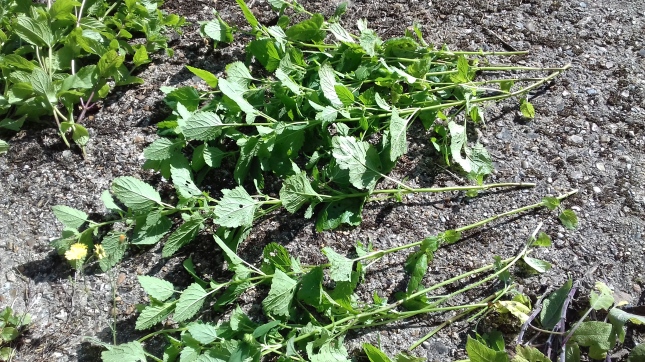 Healing without box rest – how Sophie got better with safe-space turnout and a massive sick bay.

AND It’s the 100th anniversary of women winning the vote this year. I will be interviewing some very special women whose work has always been a male preserve – trimming horse’s hooves.

My non-fiction book – A Barefoot Journey – tells the story of riding without shoes in a hostile equine world. Mistakes, falls and triumphs are recorded against the background of a divided equine world which was defending the tradition of shoeing…with prosecutions. Available on Amazon UK and Amazon US – paperback for £2.84 and Kindle for 99p.

My historical novel, The First Vet, is inspired by the life and work of the amazing early vet, Bracy Clark – the man who exposed the harm of shoeing 200 years ago but was mocked by the veterinary establishment. His battle motivated me to stretch my writing skills from journalism to novel writing and took me to the British Library and the Royal Veterinary College for years of research. Paperback price £6.99, Kindle £2.24 –Amazon UK. Amazon US. This page-turning book has more than 50 excellent reviews on Amazon and a recommend from the Historical Novel

‘I originally bought this book from Linda at a horse show a couple of years ago but only just got round to reading it. I wish I had read it ages ago! I was absolutely gripped from the first page. It is brilliantly written, well researched, and told with compassion.’ – Amazon UK reader.

I’m a writer and journalist – if you want to keep in touch, click the follow button on this campaigning blog or find me on Facebook…or buy one of my books for yourself or a friend! 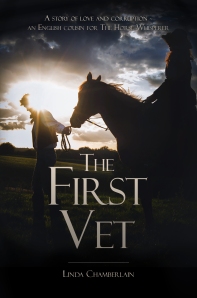