This horse and his owner are taking a huge risk. The horse is walking among poisonous plants; he may even be eating something that is harmful or could kill.

But I have news for you…many people would argue that there is more than one harmful plant in this horse’s field and that the bigger problem is less obvious.

The yellow ragwort has been the bane of horse keepers’ lives for decades. It is well known for causing liver damage and every summer magazines and horse welfare groups try to educate owners of its risk. There is no debate about ragwort.

The careful amongst us pull it up each year and, if we are sensible, we wear gloves. But the horse rarely eats the bitter-tasting plant when it’s fresh and the real danger is if it is cropped in hay where it is more palatable.

There is another worry, though, for this animal and his owner because the field is full of something very palatable that horses routinely nosh every day of the week. Grass.

It is a controversial statement and needs examination. So much of our meadows have been lost in the last 70 odd years to be replaced by acres and acres of a single species of grass. Rye grass is a great asset on a farm because it is high in sugar and therefore great for producing milk or meat.

For the horse’s hooves it is a pile of poo…

It could be the reason we are seeing so many cases of equine obesity, so many animals with metabolic problems, so much laminitis.

Last week a reader asked what was wrong with rye or alfalfa hay after reading my interview with Lindsay Setchell, (left) editor of Barefoot Horse Magazine. Lindsay’s answer is so interesting and detailed that I am copying it here in full…

She said – ‘Both alfalfa and rye have the ability to raise the blood sugar levels in your horse either through the metabolism of high protein levels, as is the case with alfalfa or more direct sugars eg NSC’s (Non Structural Carbohydrates) such as with rye. With high protein levels in alfalfa that also brings about other problematic issues for the body as well as the disruption to the delicate mineral balances such as the calcium:phosphorous ratios. When mineral balances become quite out of balance particularly with high calcium levels found in legumous plants such as alfalfa and clover, this can have quite drastic consequences if it is allowed to carry on indefinitely. 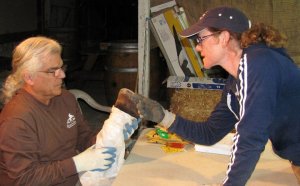 ‘Jaime Jackson (right, with Lindsay) began to pinpoint alfalfa as a particular problem for chronic/acute laminitics many years ago and found that when it was removed from the diet and replaced with a mixed variety of hays then the horses recovered. In the US alfalfa is a far more popular feed for horses than it is in the UK (although it is getting more so over here) and the horses in the US were beginning to suffer because they simply could not escape it. They were (still are) fed it in their hay forage, their bagged feeds, their pastures and it was overwhelming to the horse. Here in the UK we have a similar problem with rye. Horses cannot escape it. They are fed it in all the major commercial bagged chaffs, pellets, nuts and it is persistently fed as haylage (ryelage) and many of the pastures are rye mixes…this is disastrous for the horse.

‘Dr Carol Michael in conjunction with Bangor University found that rye grass contained approximately 300% more sugars than our native meadow grasses which were almost insignificant in comparison. The lady who asked the original question also eluded to the fact that perhaps if the horse is exercised enough then it should be ok. We don’t find that. What we are finding is that, although exercise is vital for health & absolutely necessary, it often is simply not enough to counter the damaging effects of inappropriate feed such as rye and alfalfa (I don’t think I even need to mention molasses!). We still see chronic low level signs of laminitis even on horses who are exercised well but still fed on high levels of rye/alfalfa….it’s a bit like playing Russian Roulette and it’s a cumulative problem and is the single biggest reason that horses still are being shod because of sore feet. Once rye/alfalfa is taken out of the diet or at the very least is less than 10% of the horse’s total feed consumption then we see improvements in the overall health of the horse, its feet, body and mind.

‘The BIGGEST problem of all for horses is that they are not fed enough fibre (and I’m not meaning fibre out of a bag)…horses thrive on fibre not sugar but that fibre must be from a mixed source…good mixed meadow hay and hedges etc. The horse is primarily a forager and so in their more native species specific environment they would have access to a variety of fibre/grasses/minerals, sometimes having to travel great distances to satisfy their basic dietary needs. When we remove that diversity from our horses’ diet and then start feeding excesses of one or two kinds of feeds such as rye/alfalfa, that’s when we clearly begin to see problems arise. A huge issue is that most owners/vets/farriers don’t pick up the often subtle (and not so subtle) signs of inflammatory problems caused by diet and before you know it, the horse has BIG problems. Some owners have realised that rye/alfalfa is not so good and struggle getting mixed meadow and so end up feeding single species plants such as Timothy…but this has problems too as the horse/forager needs variety. Sorry for going on. I hope this helps.’

There is an increasing demand for horse liveries which cater for the need to reduce grass. More and more owners seek places that provide track systems and hay which is fed all year round. But yard owners are so far not keeping up with demand. We need more…

My own home for horses in the woods welcomed three new arrivals this week. It will be lovely to see how well Finn, Jules and Aslan adjust to living out 24/7 with lots of movement, varied terrain and ad lib hay instead of grass. I will keep you posted. 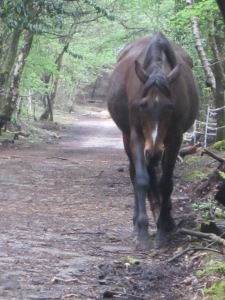 Sadly, I had to say goodbye to my elderly thoroughbred Carrie (right) last month who was getting increasingly stiff and uncomfortable. We had 11 lovely years together and discovered how well barefoot can help a horse with navicular. She will always have a place in my heart because she gave up on her passion for nudging me with her head for an afternoon when we did our photo shoot for my non-fiction book, A Barefoot Journey (see below). In order to get that shot for the cover we had to be poised patiently in front of a 20 foot drop! 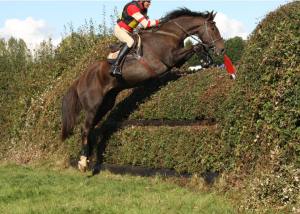 Just wanted to share this great picture of my friend Troy (left) who featured on the blog last year. He’s still doing brilliantly with rider, Richard Greer, on the team chase circuit and showing how well his bare hooves can grip in all weathers.

I will be signing and selling copies of my books – The First Vet and A Barefoot Journey – at the Holistic Hound and Horse Expo on Saturday, 5th November at Merrist Wood Arena, Worplesdon, Guildford. It’s the show’s fourth year and for the first time there will be live demonstrations as well as some great talks including Penny Thorpe on the horse’s hoof. Look out for Sue Gardner with a display of horse agility, too. I will be bringing a couple of comfy chairs and making a cosy corner for anyone needing a quiet moment and a chance to dip into a good book… 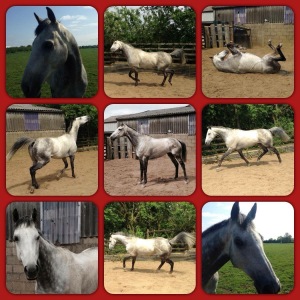 And I’m very excited about my next blog having just interviewed David Furman joint owner of the hugely successful barefoot racehorse Zakatal (left). I think Zak is about to become one of my equine heroes. Find out more next time.

I’m a writer and journalist who loves horse riding. The shoes were taken off my horses about 16 years ago as soon as I realised the harm they were causing. My non-fiction book – A Barefoot Journey – tells the story of riding without shoes in a hostile equine world. Mistakes, falls and triumphs are recorded against the background of a divided equine world which was defending the tradition of shoeing…with prosecutions. Available on Amazon UK and Amazon US – paperback for £2.84 and Kindle for 99p.

‘The author wrote from the heart and with great conviction. It read as a fiction type book, but was also being informative without you realizing it! It gives me hope with my own ‘Carrie’. I totally recommend this book to anyone….my only complaint is that it wasn’t long enough!! – Amazon reader.

‘ Required reading for anyone thinking of taking their horse’s shoes off’ – Horsemanship Magazine.

‘I loved reading this intelligently written book. It’s so good I think every hoof trimmer should hand this book out to clients who are going barefoot for the first time’ – Natural Horse Management magazine.

My historical novel, The First Vet, is inspired by the life and work of the amazing early vet, Bracy Clark – the man who exposed the harm of shoeing 200 years ago but was mocked by the veterinary establishment. His battle motivated me to stretch my writing skills from journalism to novel writing and took me to the British Library and the Royal Veterinary College for years of research. Paperback price £6.99, Kindle £2.24 –Amazon UK. Amazon US. This book has more than 50 excellent reviews on Amazon and a recommend from the Historical Novel

Here’s one of my favourite quotes from Bracy himself – ‘A horse that is free of pain will lead from the thinnest piece of chord.’

‘Fantastic read, well researched, authentic voice, and a recognition of the correlation of our best slaves- horses- with the role of women throughout history. If you are into history, barefoot horses, and the feminine coming of age story, then this book is a must read’ – Amazon US reader.

If you want to keep in touch, click the follow button on this blog or find me on Facebook…Another historical, horsey novel is in the pipeline. I am being inspired by a very famous equestrian campaigner from the past who quietly made such a difference to horses. I’m more than half way through the first draft – blending fact and fiction is such fun! And so many people have asked me to write a sequel to The First Vet. But I think I should feature one of Bracy Clark’s colleagues. It’s on the ‘to-do’ list…xxx

5 thoughts on “Fields of trouble…”