I had a horse once that escaped a lot and visited the neighbours. They tolerated me, most of the time, but I’ve had to repair quite a few gardens and offer free bags of well rotted manure as recompense.

Lately, it’s been happening the other way around. The neighbours, or rather their animals, have been visiting me and the results haven’t always been good.

First it was two pigs. Their visit was a flying one and the only damage was the ploughing they attempted with their snouts once I finally shut them in another field away from the horses. The sight of them coming merrily up our track toward the herd set off alarm bells and I was lucky enough to observe it as I was dutifully poo picking.

The herd teamed up to defend itself. I was impressed because I had never seen this before even when a dog was worrying one of them. There were six horses in the field – one gelding; the rest were mares. The pigs seemed to have no aggressive thoughts only the desire to share a bit of grass. Barnaby, the gelding, was the first to approach them. This was done with an arched neck; he was going to do this job looking like a stallion no matter what the vet had done to him years ago. He went into trot and as he got closer to the pigs he sent them squealing and running by kicking out with his front feet.

Carrie, the lead mare, joined him and chased them out of the field. The whole operation was successfully completed within minutes. Two other mares surprised me by bringing down the electric fence and running away as far as they could rather than staying with the herd.

I imagine something similar happened when the neighbour’s cows broke down a fence and joined my horses in their field. Here’s one of them. Behind bars where I prefer them. With the most almighty look of guilt on her face. 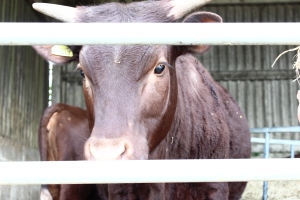 What a guilty look

There wasn’t a cow in sight when I fed the horses breakfast one morning but Carrie had the most enormous gash on her rear end. It wasn’t immediately noticeable because she wasn’t lame and ate happily…but she was slowly dripping blood. At first I had no idea what had caused it. It must have been six inches across and had a deep hole in the centre. For some reason, shock possibly, I tried applying wound powder and wondered how I might fix a bandage. I woke up and phoned the vet.

He came in a little white van but he was like the cavalry to me. As we walked to the yard in the field he told me he was a locum for the practice (Lingfield Equine Vets) and often worked in Paris with racehorses. Oh, no, I thought. This is going to be awful. I had seen a few vets wince at the sight of my set up and raise their eyebrows at the strange lack of metal horse shoes. On one occasion, a vet reluctantly agreed that our pony with colic might be better off recovering with her friends rather than being shut in a stable but he was visibly exasperated that I didn’t want to comply with his advice. Couldn’t I use a neighbour’s stable? I told him the poor animal would die from the distress.

Would this new vet be any different? He might faint when he met Mrs Muddy and her friends. I was getting my apology ready for the lack of stabling and my quirky approach.

No, he said, when he saw them all. He liked horses like this, too. Sure, I thought. Even hairy ones that don’t wax and pluck.

He gave Carrie sedation so that he could stitch and staple her leg back together. I couldn’t watch and stayed near her head like a nervous father at a birth. It was going to be fine, he said, confidently. I was left with antibiotics and I asked him whether I should confine her to the yard or shut her in the field shelter. For some reason I was feeling obedient. Surely, he wouldn’t advise turning her out with the herd. I mean, they nearly always recommend box rest in my experience.

‘Oh, yes,’ he said enthusiastically. ‘Look at this beautiful field. She will get better more quickly in all this nature. The air is fresher than on the yard; fewer germs. And the movement will help.’

I was shocked. I had never heard a vet say anything so sweet in my life.

So, I turned them loose once the sedative had worked off. The winter field hadn’t been grazed all summer so they took to it eagerly. Carrie thought to follow at the same pace but changed her mind and caught up in her own time.

Two weeks later the vet came to take out her staples. They had come out by themselves, however, and his only job was to inspect and admire the healing wound…oh, and to advise me to start riding her gently again.

By this time, I knew how she got her injury because the cows revisited the summer field again. At last, I had an explanation for that deep hole. And that’s why I prefer cows who wear horns to be behind bars.

This all happened more than a year ago but I’m sharing it because I learnt a lot from it. Firstly, the speed a horse can heal given natural conditions and secondly that some vets thankfully are fully aware of it.

One thought on “Carrie and the Cow”